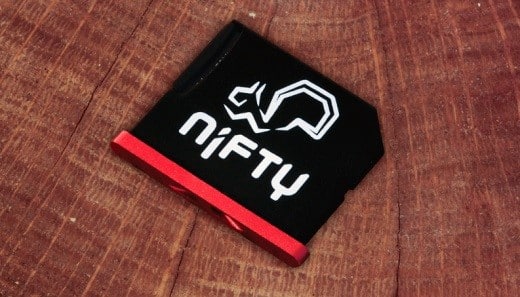 The Nifty MiniDrive is a rare example of a Kickstarter campaign that raised over 3000% of their original $11,000 crowdfunding goal. In a span of just 28 days, the project attracted pledges from 9,805 backers, totaling $384,319 funds raised. The Nifty MiniDrive is an easy to use MicroSD card adapter that sits flush inside the MacBook and uses a microSD card to upgrade the amount of storage on your computer by up to 128GB.

How did you come up with the idea for the Nifty MiniDrive?

My co-founder, Piers Ridyard, had just bought a MacBook Air, and after quickly running out of space on it was looking for way to increase the storage on it. Without wanting to go down the route of bulky, external harddrives, he went to the Apple store and asked if they could upgrade the storage on it. He was told this was something they could not do, and that if he tried to do it himself it would void the warranty.. Most people would have given up at that point; but being the kind of guy that Piers is, he decided to actually invent a solution to his problem which ultimately became the Nifty MiniDrive.

Why do you think you were successful on Kickstarter?

Before launching on Kickstarter we actually ran an unsuccessful Indiegogo campaign. It was unsuccessful in that we got absolutely nowhere near our funding goal, but perversely this failure was one of the biggest factors in our Kickstarter success. Not only did it allow us to hone some of the flaws in the original idea, but most importantly it exposed us to a core group of early adopters who were already experiencing the problem we were trying to solve.

When we launched on Kickstarter our Indiegogo supporters were the first people to spread the word about the campaign. The product was later picked up by the Verge and then appeared on the front-page of Kickstarter, which obviously had a huge impact on the overall numbers, but it was the initial support from our early adopters that created this momentum.

How did you manage the unexpected number of backers on Kickstarter?

We were completely unprepared for the numbers we achieved on Kickstarter. In fact the very first MiniDrives were actually baked in an oven by me and Piers in his flat in Manchester. After our less than overwhelming campaign on Indiegogo we were expecting to bake a few more in the oven, and if things got totally out of control we had a UK manufacturer lined up. In fact things got, much more than totally out of control and we found ourselves in a situation where we needed to manufacture and ship over 12,000 MiniDrives.

It soon became evident that we had reached the threshold where we could not viably do this in England, and therefore had to look to manufacturers in China so that we would be able to scale up production.

In fact, the number of backers had huge implications for all aspects of the operation and was not something we had really thought about when we first launched the product. This meant that as soon as the campaign ended we needed to work out how to put systems into place that would allow us to scale all parts of the business. Outsourcing logistics and using cloud-based services such as Zendesk for customer support really helped make this manageable.

How quickly did you fulfill orders after the campaign?

The campaign ended in early August 2012 and we started sending out the product in early February 2013.

What challenges did you face during the transition period?

It was a further 6 months between shipping to our Kickstarter backers and when we started shipping to the general public. Through a combination of our own inexperience and not necessarily working with the best manufacturing partner for us, about 10% of what we shipped to our Kickstarter backers turned out to be faulty. That was a really big kick in the teeth for us and we felt like we had really let our backers down. It could have been quite easy to give-up there, but we had a really clear vision of what we wanted to achieve and did not want to let down the people who had supported us at the very beginning.

We spent the next 6 months working harder than we had ever worked to redress the quality issues seen in the first production run and building something that could be turned into a viable business rather than a one-off Kickstarter project.

What are some of the changes you made?

The first and most important change we made was changing our manufacturer. Following a series of serendipitous meetings we ended up working with Foxconn who do a lot of manufacturing for Apple, which was a huge win for us. The product also underwent a fundamental redesign and we hired an external design consultancy to conduct a thorough Design for Manufacturer analysis to assess the product’s suitability for mass production. We also learned to delegate more and took on two people to help with customer support. With a rock-solid product and systems in place that would allow us to scale, we finally started selling to the general public just over a year after our Kickstarter campaign.

Were you worried at all about being down for an extended period and not selling?

Once your product is out there, it’s relatively easy to be copied, so we were very vulnerable during that period. A competitor did come along and took advantage of us during that period, which was incredibly frustrating because you pour a lot of your energies into building a product and then to see someone come along and copy your idea is quite hard to take. However, we knew that we had a great team behind us and we had this great product and that as soon as we started selling again that it would be OK.

How have operations changed in the past year?

Immensely! At the end of Kickstarter it was just me Piers and Bea (our amazing CFO, who makes sure we don’t spend our all money!). Now we are a team of 8 retailing in 40 countries with 25 distributors, and can count Apple’s online store in Europe as one of the places where we sell our MiniDrives.

Although we are normally based in Manchester, England we are currently spending 3 months in Tel-Aviv working on our next project. This first product was a very simple idea, but it has allowed us to create the foundations of a business with a steady cashflow. We’ve got some pretty exciting ideas in the pipeline, and the idea now is to keep innovating and bring something new to the table.

Whether you're considering signing on with us or are already one of our valued customers, with the holiday ...

Ecommerce businesses have grown massively over the course of the past year. Many business owners, perhaps ...