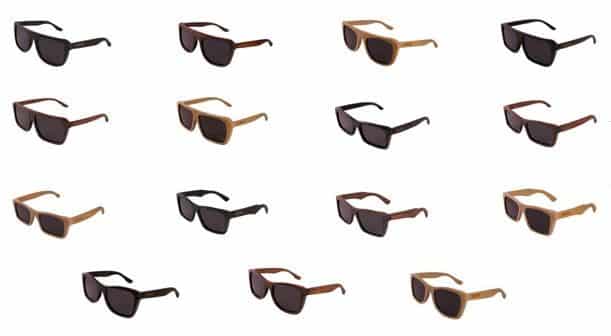 Panda’s Kickstarter campaign exploded onto the Kickstarter scene in late 2011, raising six times their original goal. Described as “The First Eco-Friendly Brand of Luxury Sunglasses,” this project managed to attract 275 backers over the span of 60 days.

How did you come up with the idea for Panda?

Vincent Ko: A few years ago, the other founders and I were at our college homecoming reunion and were in a retail store where we saw Toms shoes. We were all big fans, because Toms paved the way was one of the first entrepreneurial-social consumer products. That was the catalyst behind Panda’s social mission. We figured we could make a fraction of the impact that Toms made with a different product—in our case, that was eco-friendly sunglasses.

How did you turn that idea into a business, and why did you choose to launch via crowdfunding?

We wanted to make a discussion piece and we figured sunglasses would be the best way. We had to link up suppliers and manufacturers with a source of bamboo and see if they’d be willing to make sunglasses out of wood. We chose crowdfunding because we had an idea for the bamboo sunglasses, but although we wanted the product, we weren’t sure if others wanted the product as well. Kickstarter is huge now, but when we launched the campaign in 2011, it was more a platform for trading ideas. Kickstarter would be a way for us to see if other people also wanted bamboo sunglasses.

“Kickstarter would be a way for us to see if other people also wanted bamboo sunglasses.”

You raised nearly six times more than anticipated. How did that affect your strategy?

It proved to us that other people wanted the sunglasses and allowed us to have confidence to say “OK, let’s really grow this and make it into a business.”

Who did the campaign target?

When we first started, there wasn’t much of a target. We thought it would be a younger, eco-friendly audience. But over the last three years, we’ve found that our customer base is so scattered—there’s no particular age group and people are buying them for various reasons, whether it’s because they’re eco-friendly or just that a wooden sunglass has a very cool aesthetic. It’s a win and it’s a struggle. It’s a win because we’re not limited to one customer segment, but it’s a struggle because it’s not a niche where we can pinpoint exactly who the customer is.

Quick Tip: Business plans are certainly necessary, but you won’t figure out who your ideal customer is or why they will buy your products until you actually get out there and gather real consumer behavior data.

Kickstarter gave the Panda team a platform to test out whether or not others actually wanted high-end bamboo sunglasses and to figure out the customer demographic that would be most likely to buy the product (along with their reasons for supporting).

How do you reach such a broad group post-Kickstarter?

Press coverage drove a lot of traffic to our site. We were in business, fashion, and eco-friendly lifestyle publications. A fashion brand that started from a crowdfunding movement is a sign of the times.

How quickly did you shift from the crowdfunding phase to order fulfillment?

At the same time, we also allowed customers that were not Kickstarter backers to purchase at full retail price, and we began filling orders right away. Initially, we had to individually re-package the first 500 orders in our garage because we were getting the casing, labels, and sunglasses from various suppliers. We dropped the orders off with Fulfillrite, which fulfilled them.

Quick Tip: Don’t wait to set up your website until after your campaign is over. If you meet your fundraising goal, then you have the perfect opportunity to convert individuals who find your successful campaign from news websites, social media, and forums into new customers!

At the very least, set up a landing page to collect email addresses of individuals interested in pre-ordering your product. There are a lot of tools out there that will help you set up a website if you don’t have any kind of coding ability. I recommend Wix, SquareSpace, or Shopify.

How did you approach your first year?

Our first-year strategy was to have an online presence. We built our online store in the first three months and did industry tradeshows, including ENK in New York and Magic. We were a little bit out of our league but it was good. From there, we ramped up our wholesale business.

Why did you choose to attend tradeshows?

We had a couple of advisors that were either former or current executives at well-known retail brands. They said that though the tradeshow business can be expensive, we should try it out and see what happens.

Our first tradeshow was great. Though we were the youngest in the group and had a unique product, we stood out in a good way. This was within four months of opening, and we were there shaking hands with some of the largest retailers in the country. Within our first year, we were placed in the Trend Accessories section of Nordstrom stores nationwide. We’ve since gone away from tradeshows and are focusing more on our online presence and empowering our retailers by driving foot traffic to their stores. One way we do that is through a store locator on our website.

Quick Tip: When most people are brainstorming projects to launch on crowdfunding websites like Kickstarter, they start with ideas that they are passionate about and products that they want to see exist in the world.

After raising over six times their Kickstarter goal, Panda has gone on to become a leader in their niche and have attracted the attention of big name brands like Nordstrom.

7 Red Flags When Searching for a Fulfillment Company

It's no secret that we at Fulfillrite believe that outsourcing fulfillment is a good idea. In fact, if you ...

Black Friday has passed and Cyber Monday is over, but sales have just begun. They say, "strike while the ...

How Ecommerce Fulfillment Can Be Your Strategic Advantage

Fulfillment isn't just a responsibility that must be handled for a business to survive. It's tempting to see ...