How Gamefound Works – The Growing Alternative to Kickstarter for Board Games 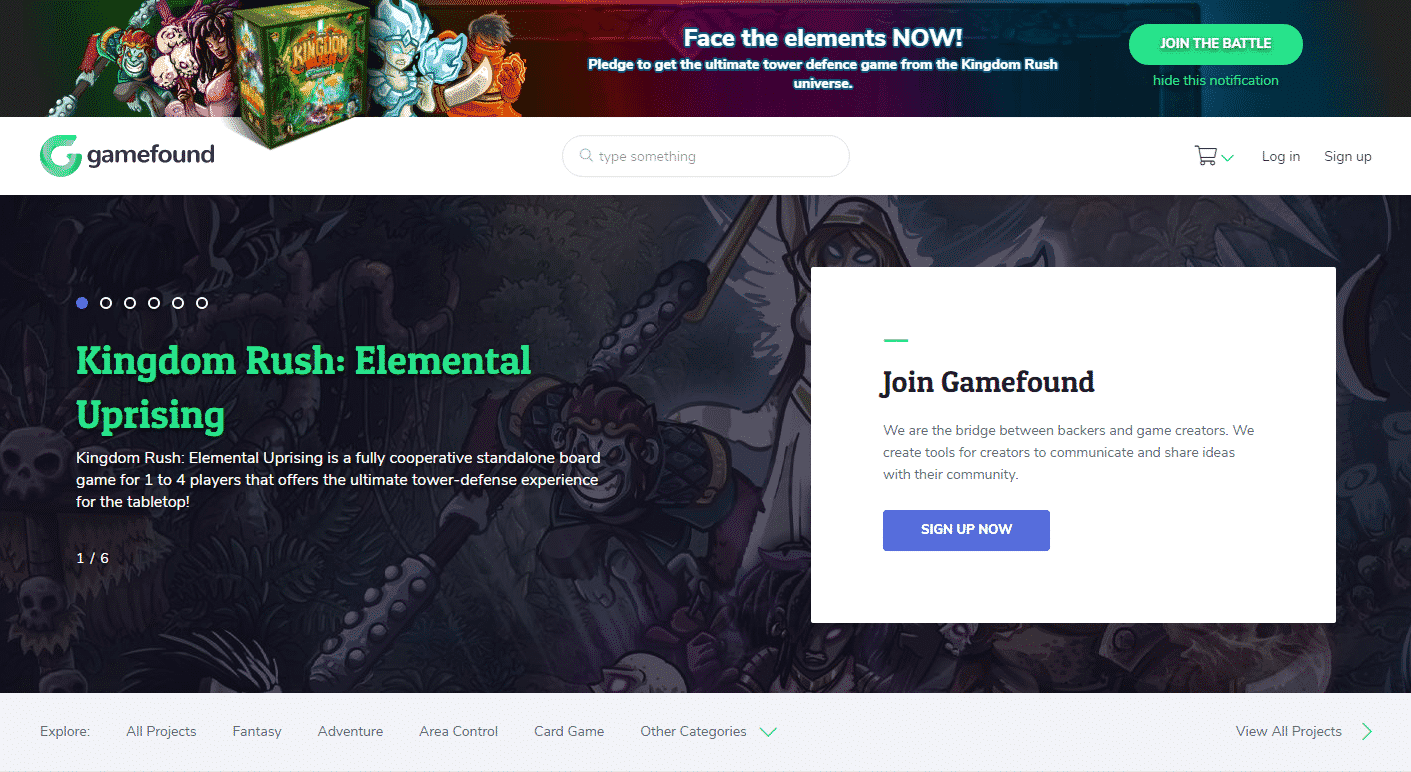 We have talked quite a bit about how finding your niche can lead your business to success. That is exactly what Gamefound has done by creating an alternative to Kickstarter specially made for board games.

Gamefound specializes in crowdfunding board games and works to bring creators the platform to seamlessly communicate with their intended community.

Since the concept was first introduced in 2009 by Kickstarter, crowdfunding has dramatically changed how businesses seek funding. With sites like Kickstarter and Indiegogo, it has never been easier to take your idea and turn it into a reality through the financial backing of those who will use your product.

Crowdfunding is growing too, by almost 34% over the course of 2020. More and more people are turning to crowdfunding sites to get their idea funded and out into the world.

A Quick Refresher on Crowdfunding

Before we dive into the nitty gritty of this, here’s a quick summary of crowdfunding works:

The basic idea is simple: you make a good pitch, and create a campaign on a website like Kickstarter. If your pitch is strong enough to raise enough capital, you go to the next stage of your business. If it fails, no one’s card is charged and you don’t waste anymore money making a product no one wants.

Crowdfunding lets you mitigate financial risk. One of the most important parts of marketing is keeping your target audience in mind. Unfortunately, you can’t read their minds. Crowdfunding lets you see what happens when you pitch an idea to a large audience, allowing you to get feedback before you spend a lot of money on manufacturing or other business expenses.

– Kickstarter First, Shopify Later? The Benefits of Crowdfunding Before eCommerce By Pierson Hibbs

This business model is beneficial to creators everywhere, as it allows for people to take their product and try to make it into a reality with little to no capital upfront. Pretty sweet, huh? The other neat thing about crowdfunding is it provides you with valuable insight into your target audience, how your products are perceived by them, as well as potential changes to make to your product before it reaches production.

Kickstarter has been on top of the crowdfunding mountain for awhile now. So it may seem strange that Gamefound is challenging its leadership.

Is something wrong with Kickstarter? Not really. Gamefound just has a slightly different angle, and one which will help benefit one audience in particular – tabletop games. Their whole platform is based off of crowdfunding for board games.

This might sound like a strangely limited niche, but it makes sense. Historically, board games have performed well on Kickstarter. In 2018, board games were estimated to have raised $192 million or $564 million for the website as a whole.

What separates Gamefound from Kickstarter is what they offer. Gamefound has worked to improve features of the campaign process such as communication, stretch goals, pledges, as well as add ons. Take a look at some more details on this:

Gamefound admit that the time spent in being behind the scenes [as a pledge manager] has benefitted the production of a crowd funding platform. They’re aware of what areas are sticking points, and they’ve worked to change those. For example, adding additional options, like upgraded tokens, or add ons, can now be completed within the pledge, rather than after the campaign ends. Plus, stretch goals now unlock automatically, comments can be sorted by topic (hashtag) so you can see any similar concerns or shout outs, and a bit more clarity in your pledges as to what you’ve picked, what you’re gaining in stretch, and easily transition into the pledge manager afterwards if needed.

– Check Out Gamefound, The Alternative to Kickstarter by tabletopgaming.co.uk

Emphasis is mine in the above quote. I wanted to highlight some of the features that really makes Gamefound stand out from Kickstarter.

Gamefound works by keeping game creators at the forefront of their mind. Gamefound’s crowdfunding platform is built with 12 years of crowdfunding tradition behind it. Stretch goals and add-ons, for example, are handled automatically by Gamefound’s platform instead of manually. That’s a big change!

The Gamefound platform directly benefits tabletop board game crowdfunders by providing a site with specifically their target audience in mind. Gamefound provides a site that gamers can use to find new games and that creators can use to pitch new games.

Gamefound has the bones of wildly successful crowdfunding site, but is unique in that it’s been set up with one particular audience in mind. I cannot thing of any major crowdfunding sites for other niches, so Gamefound is breaking new ground.

For those looking to create more tabletop games, and the gamers looking to back these projects, Gamefound may be a perfect match. This is a website to watch, for sure. It may also be worth using in the near future, too.

Using a brand new crowdfunding platform is risky, but it’s not without proof. For example, Kingdom Rush: Elemental Uprising by Lucky Duck Games have nearly $350,000 at the time I’m writing this. New as the site may be, Gamefound already has fans!

What are your thoughts on Gamefound? Let us know in the comments below!

Having raised over half a million dollars in 25 days on Kickstarter, Robot Turtles founder Dan Shapiro has ...

The Truth Behind Multiple Warehouse Locations

As an e-commerce business owner, you’ve thought long and hard about shipping costs and customer ...

7 Red Flags When Searching for a Fulfillment Company

It's no secret that we at Fulfillrite believe that outsourcing fulfillment is a good idea. In fact, if you ...